We received the ‘Euros from your paycheck’ award from Banco Santander 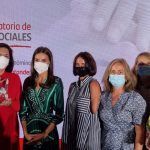 Last Tuesday, September 21, we were honoured to be invited to the XIII Call for Social Projects “Euros from your Paycheck”,  awards ceremony, chaired by Her Majesty Queen Letizia in the Nouvel space of the Reina Sofia Museum.

Our project “Smiles on Wheels” was chosen as one of the 16 winners, among the more than 300 projects presented. The prize money will go to the acquisition and maintenance of several models of bicycles and tricycles adapted to different types of disabilities, which as you know are already available at the Mobeo store in Madrid Río (Centro Comercial Plaza Río Norte 2).

Winning this award would not have been possible without the support of many people to whom we would like to give a special thanks: to Lary Leon for being our ambassador, to Marjolein van Hellemondt for being our godmother, and especially to Ana Botín for making this important recognition possible. And of course to all the employees of Banco Santander Spain, because without their votes and generosity it would not have been possible to have this support for the “Smiles on Wheels” project.

Thank you for giving us the means  by which we can support so many people having access to adapted bicycles!