“The child must fully enjoy games and leisure, which must be oriented towards the ends pursued by education; society and public authorities will strive to promote the enjoyment of this right. ”

(Principle 7 of the Convention on the Rights of the Child. United Nations Organization)

Integrative playgrounds are facilities for play that take into account the special needs of children with disabilities, promoting their participation and, in turn, integration and inclusion in normalized life, promoting, from an early age, the relationship of disability with their environment, families and other children with and without disabilities. This way, they become able to acknowledge the skills and abilities of others, the similarities between them, enhancing their creativity and fostering their personalities and certain capabilities. In other words, these are spaces of awareness that contribute towards changing the perception and attitudes that society in general has towards this reality.

Fundación Lukas would like to see this park initiative to be extended further, to this end, we have prepared a Construction and Equipment Manual for Integration Playgrounds that will help other initiatives to design and construct these types of all-inclusive parks. 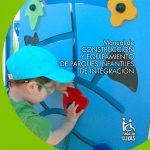 We hope that this manual serves as a call to attention and inspiration for professionals in the sector, associations and public entities, because all children, whether or not they have a disability, have the right to have a park where they can play.

We want this manual to reach the maximum number of people and be widely disseminated, so you can find and download this accessible manual at the following link: https://www.fundacionlukas.org/images/files/ManualParquesInfantiles_FLK.pdf

The development of this project was supported by Bankia through the Red Solidaria program, and it was inspired by the Manual for Accessible Playgrounds by the Dutch entity NUSO Speelruimte Nederland.

For more information and advice regarding the integration parks contact: elena.guembe@fundacionlukas.org

The Lukas Foundation, whose vocation is to help improve the quality of life of people with severe multiple disabilities and their families, made contact with the parents of a student with motor disabilites at the CEIP School Forest schools when compiling the “Integration Playground Equipment and Construction Manual“.

Start-up of the park

The school is dedicated to ensuring the health of its students by integrating nature into their education. Since its inception almost 100 years ago, this school has been a pioneer in this field. The school needed to undertake a substantial upgrade its playground and given that the playground was property of the autonomous Community of Madrid, the cost of this large Project was to be funded by the local government. At that time, the Lukas Foundation approached the school’s board with an offer to raise the funds for the project and to add an all inclusive park to the Project.

The idea was accepted and the Lukas Foundation worked with the school’s administration to develop a design where in one part of the playground there would be an integration games area in which all the children, those with disabilities and those without could play together. This project was put together by a school mother, architect and accessibility specialist, following the criteria of Design for All and Universal Accessibility. It was presented to the school management at the end of 2015.

The Community of Madrid adapted the land, did the construction work, whilst Lukas Foundation acquired and placed the selected games and playground equipment.

Today, because of the way the playground is set up, all the children play together quite naturally. Almost 500 students are more sensitive to integration through play and children with disabilities enjoy true inclusion.

The integration playground of CEIP Schools Forest is about 500m2. The terrain initially had a steep slope so it had to be adapted. A playful, bright rubber pavement was laid which connected the two levels by a gentler slope.

An existing game was reconstructed in order to meet the requirements of those with handicaps and a house was constructed with includes motor games and balance equipment. All of these exciting new possibilities generate good communication and shared play.

The new games that have been installed are:
– Double slide. Several people can slide at the same time.
– Carousel with limited speed. So that, working together, the children who are outside turn those who are sitting inside (with a wide entrance to facilitate the access of a wheelchair).
– A house in the shape of a mushroom provides a surface to climb and also a space to crawl and play under.

The Children’s Park has a wide access from the patio, with a ramp on one of its sides to go up to the highest part of the terrain, and with a staircase ramp to go up the other end.

All the games that the Foundation has contributed to the project, have the TUV certification.

Public Park of Integration in Busot

The Integration Public Park is located in the beautiful Alicante town of Busot.

Address: Urb. El Carril III, 8B (right at the entrance to Busot)

We started this project as we believe that all children, whether or not they have a disability, have the right to a playground. We are working towards true integration, which is achieved by sharing and doing things together.

With the Public Park of Integration in Busot we want to promote play as a way of learning and coexistence.

On a plot of approximately 2,500 m2, a public place for leisure activities and fun for all has been built.

In the park there are various pieces of adapted playground equipment, the most impressive is a large wooden fort designed with two floors.  It has several ramps that allow access for wheelchairs.

The land is landscaped and has two gazebos providing shade with tables designed for wheelchairs. There is also a large wheel-chair accessible bathroom, which even has a diaper changing table.

To facilitate access, several parking spaces have been designated in the vicinity, the majority reserved for people with disabilities.

The Public Park of Integration in Busot complies with European regulations UNE-EN 1176 (which registers children’s spaces) and UNE -EN 1177 (on flooring).  It also complies with the TUV regulations.

Other integration parks adapted in Madrid and Alicante

If you are interested in visiting more adapted parks, we leave information about those present in Alicante and Madrid, highlighting the Canal Park in which we have collaborated sharing our experience:

The Community of Madrid has made available to citizens a new public park in the Madrid district of Chamberí, which has a children’s play area adapted to children with functional diversity. For the design of the park they had the collaboration of Lukas Foundation. Children will enjoy this new space from 10:00 a.m. to 8:00 p.m. from October 16 to April 30 and from 9:00 a.m. to 10:00 p.m. from May 1 to October 15. We hope that from now on many children of the district can enjoy many moments of games where integration and smiles are very present.

The Parque del Aviocar C212, is located in the neighbourhood El Bercial (Getafe, Madrid) and is a tribute to aviation and the link that unites it with the city of Getafe. [More info]

The Somontes sports complex has this ONCE Foundation park adapted for children with physical and sensory disabilities. A large multi-game space that occupies more than 100 square meters, built according to the principles of Universal Accessibility and under the concept of “Design for All”. [More info]

The municipality has playgrounds adapted for children with disabilities in the Plaza de Pontevedra, in the Parque de las Palmeras, in the Darwin Sur park, in the Plaza de Orense, and in the Violeta Friedman and La Paz parks. [More info]

Adapted play area in the Summer Pine Forest, which includes adapted games such as an adapted frigate, a triple swing with adapted seats, an inclusive carousel, a raft dock, a swan and a Teepee carousel. [More info]

This park, known as the ‘lunar module’, has been designed so that all children can play there at the same time. It has a swing equipped with an inclusive seat, which two or more children can use at the same time. The ground is made of continuous rubber and there is also a slide and games to develop cognitive abilities. [More info]

There is an integration children’s play area in the Plaza de la Constitución for children between the ages of 2 and 12. The park’s two integration docks allow the use of games by children with certain motor disabilities.

The Adolfo Suárez de Majadahonda park is the first park in Spain accessible to people with visual disabilities. The City Council offers blind people geographic and descriptive information about the environment. [More info]

– Currently in Madrid there are 18 integration areas scattered throughout the urban map. Four have been renewed with this action: Integration Area «Torres Miranda» in Zona Delicias (Calle de Torres Miranda, 2, 28045 Madrid, play area in Calle Párroco Eusebio Cuenca * (Arganzuela), two on Celio Villalba Avenue ( Hortaleza), and another one in the Sierra de Grazalema square * (Villa de Vallecas). * – At least 80% of the elements are integrative-

The two large parks in the city are fully adapted: the 9 de Octubre park (developed by the Sense Barreres association of the disabled) and the El Campet park. [More info] 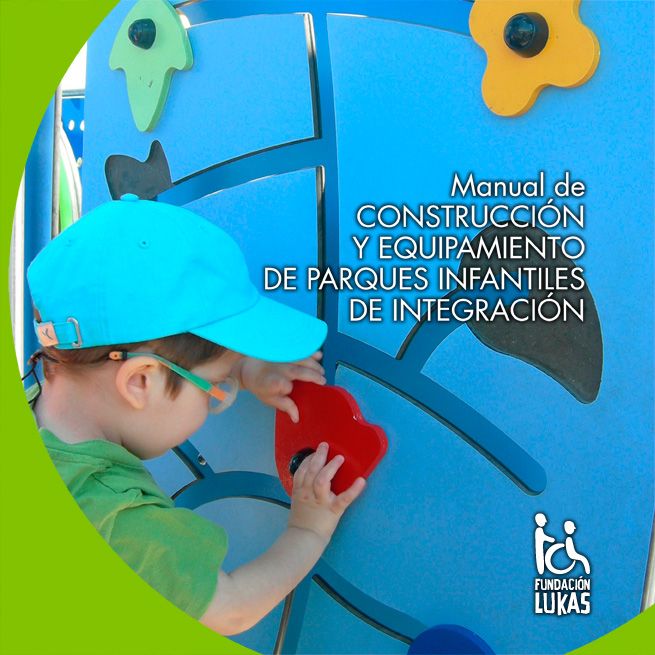 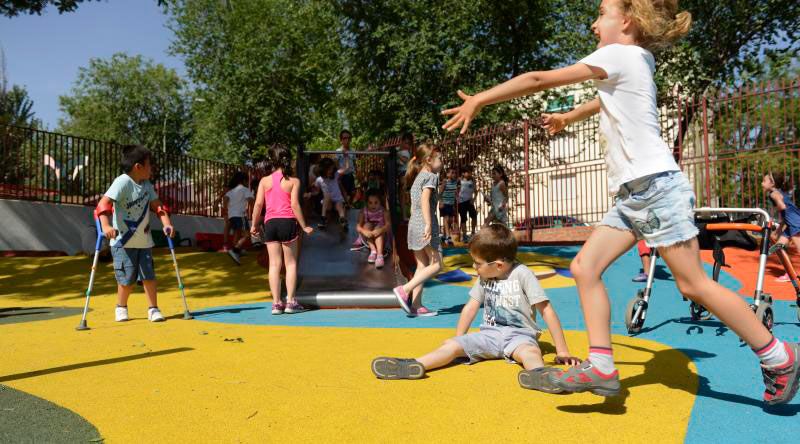 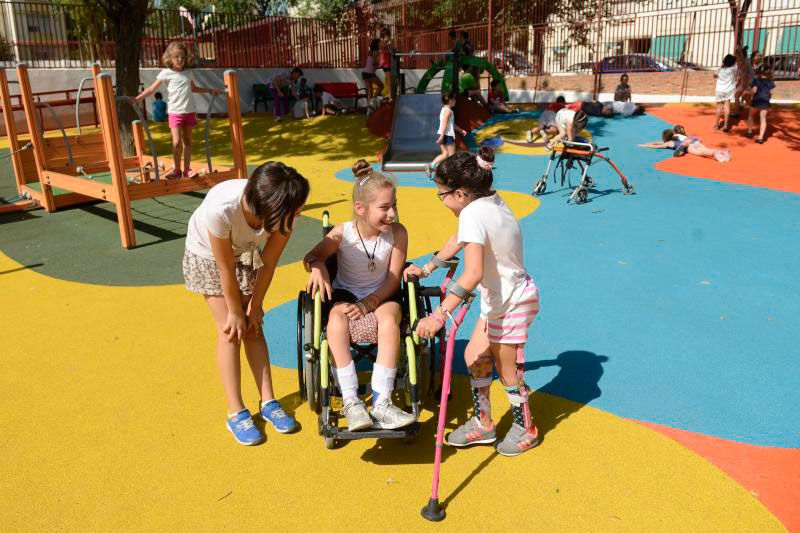 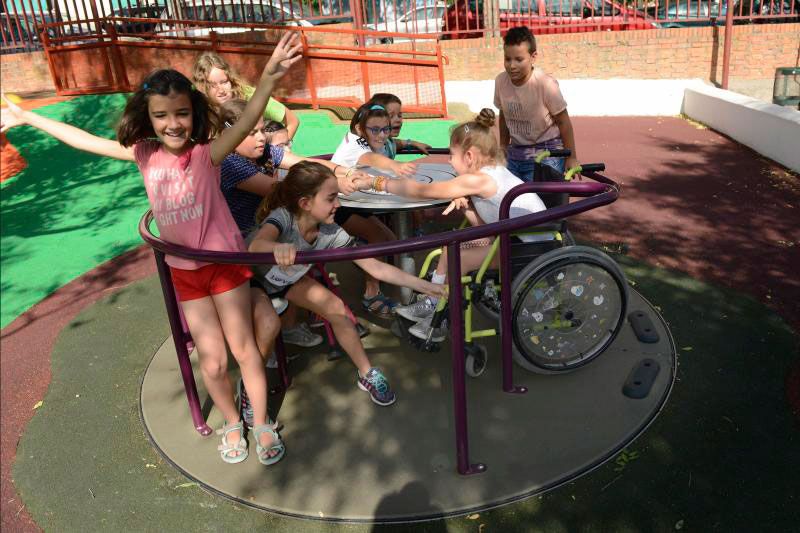 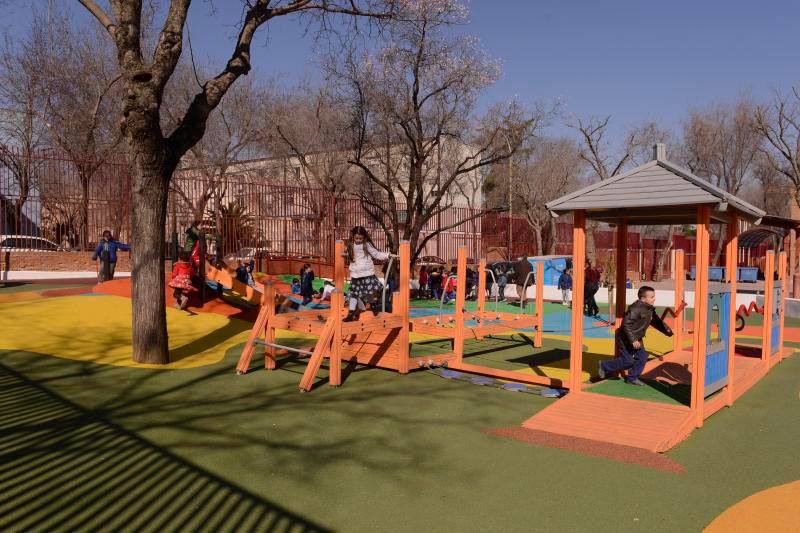 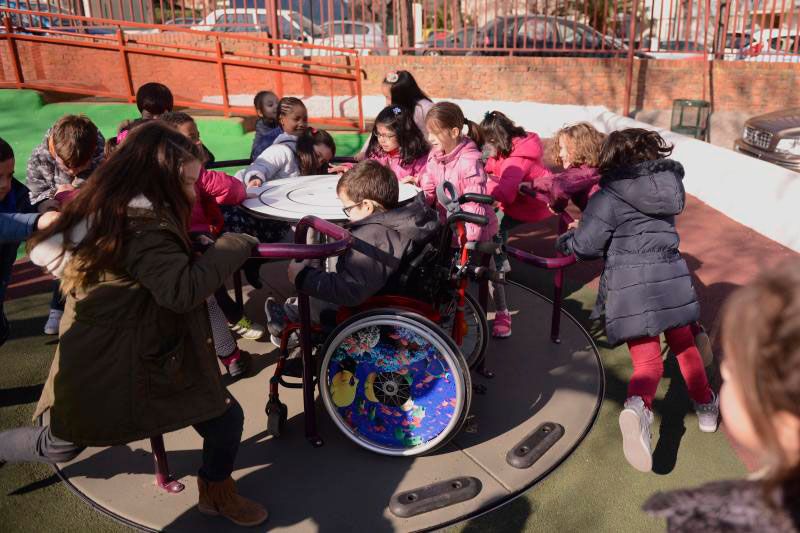 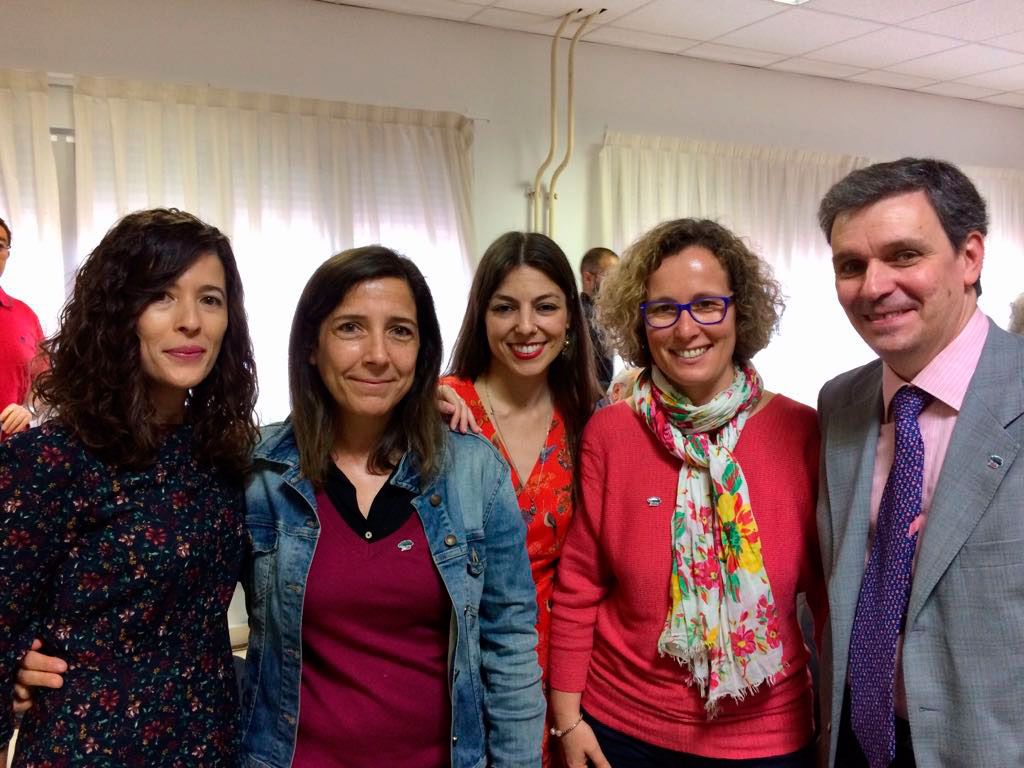 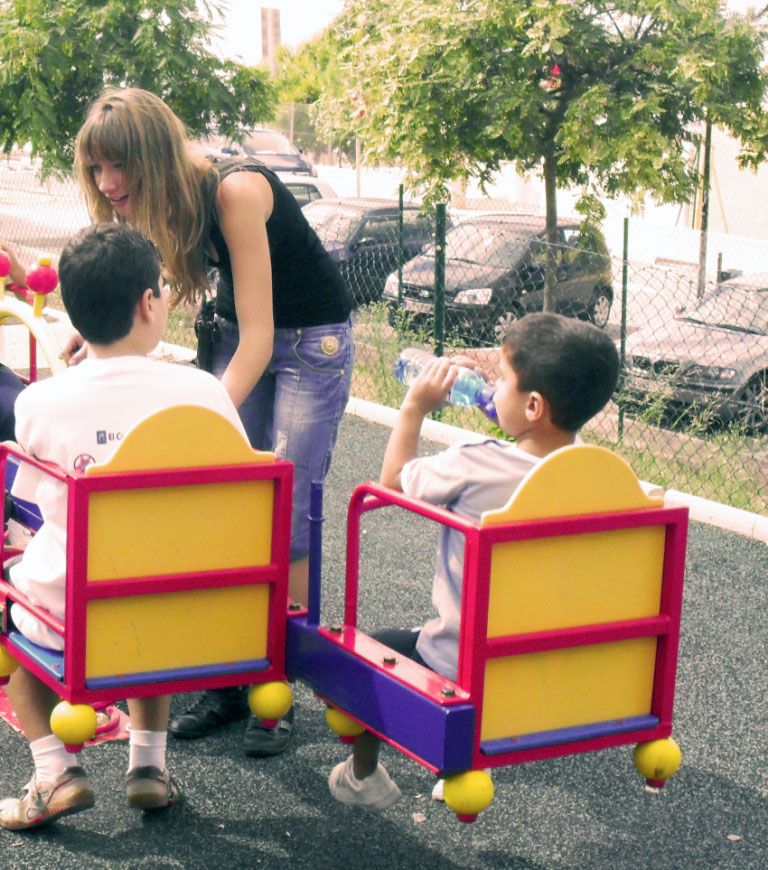 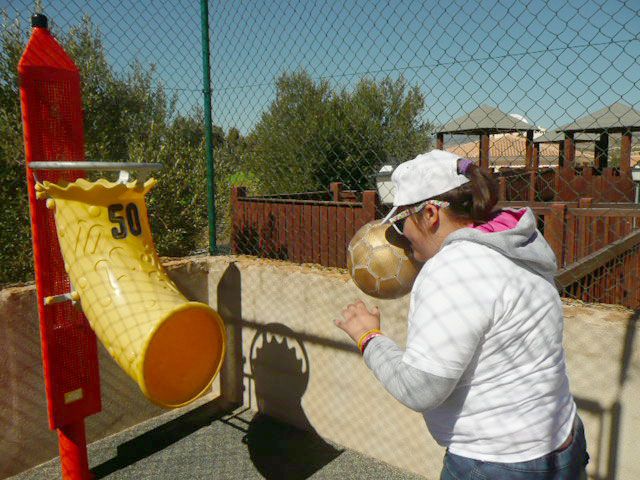 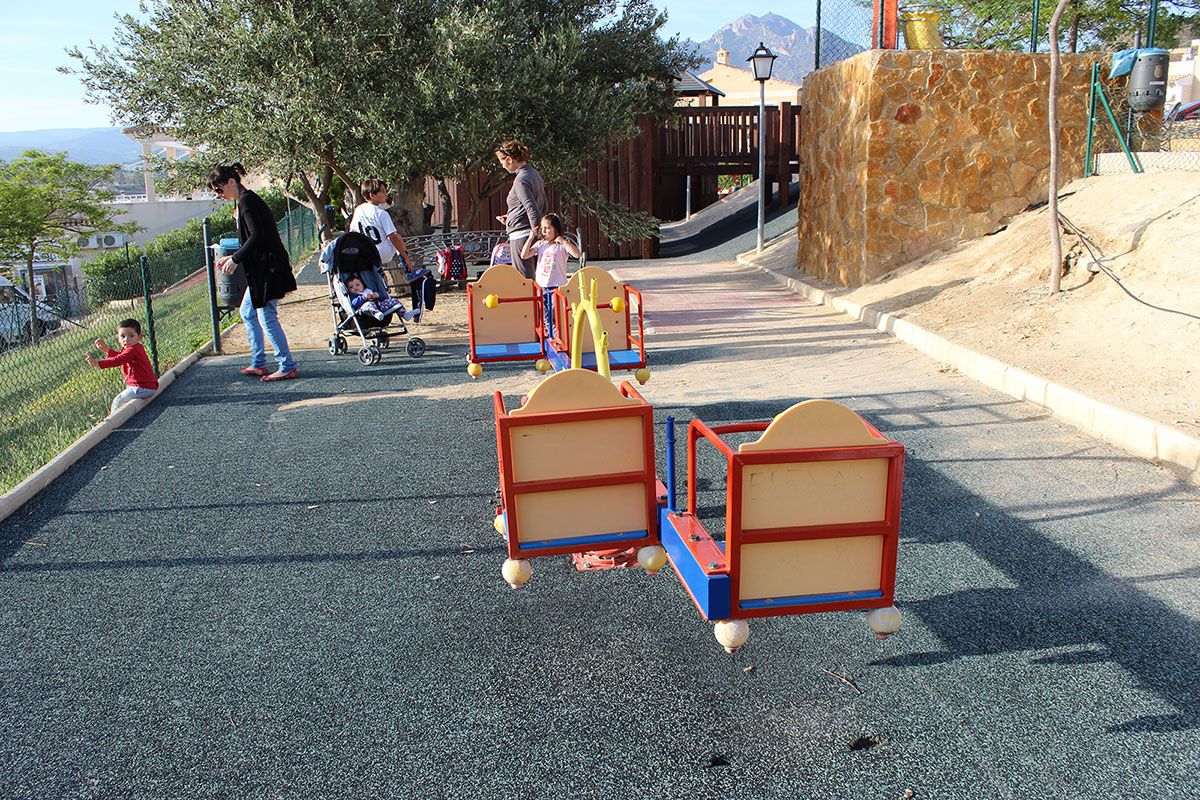 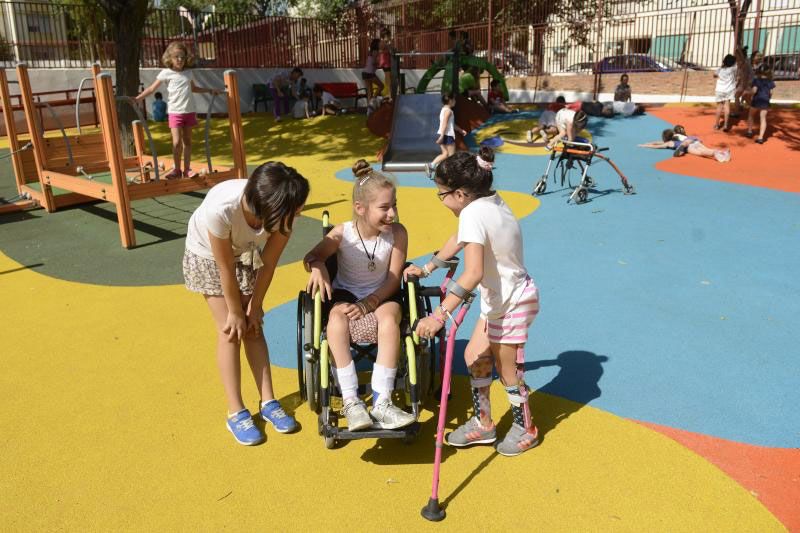