Other integration parks in Madrid and Alicante

The Community of Madrid has made available to citizens a new public park in the Madrid district of Chamberí, which has a children’s play area adapted to children with functional diversity. For the design of the park they had the collaboration of Lukas Foundation. Children will enjoy this new space from 10:00 a.m. to 8:00 p.m. from October 16 to April 30 and from 9:00 a.m. to 10:00 p.m. from May 1 to October 15.
We hope that from now on many children of the district can enjoy many moments of games where integration and smiles are very present.

Park of the plane in Getafe

The Aviocar Park C212, is located in the neighborhood of El Bercial (Getafe, Madrid) and is a tribute to aviation and the link that links it with the city of Getafe. [More info]

Park of Somontes in Madrid

The sports complex of Somontes has this park of the ONCE Foundation adapted for children with physical and sensory disabilities. A large multigame space that occupies more than 100 square meters, built under Universal Accessibility principles and under the concept of “Design for All”. [More info] 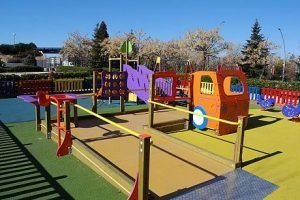 Children’s area with rubber floor and adapted swings whose protagonist is the adapted multi-game “Fire Station”. Located in the Solidarity Park [More info] 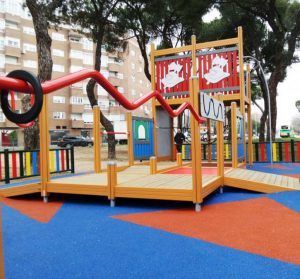 The municipality has playgrounds adapted to children with disabilities in the Plaza de Pontevedra, in the Parque de las Palmeras, in Darwin Sur Park, in Plaza de Orense, and in the Violeta Friedman and La Paz parks. [More info] 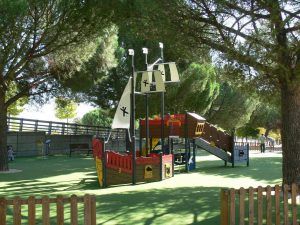 Playground adapted in the Pinar de Verano, which includes games adapted as an adapted frigate, a triple swing with adapted seats, an inclusive carousel, a balsa dock, a swan and a Tipi carousel. [More info] 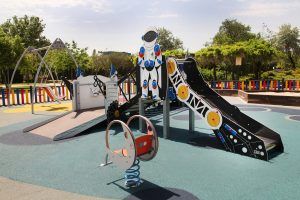 This park, named ‘lunar module’, has been designed so that all children play at the same time. It has a swing

endowed with an inclusive seat, which two or more children can use at the same time. The floor is continuous rubber and there is also a slide and games to develop cognitive abilities.

There is an area of ​​children’s games of integration in the Plaza de la Constitución intended for children aged between 2 and 12 years. The two park integration docks allow the use of games by children with certain motor disabilities.

The Adolfo Suárez de Majadahonda park is the first park in Spain accessible to people with visual disabilities. The City Council offers blind people geographic and descriptive information about the environment. [More info]

– Currently in Madrid there are 18 integration areas distributed throughout the urban map. Four have been renewed with this performance: Integration Area “Torres Miranda” in Zona Delicias (Calle de Torres Miranda, 2, 28045 Madrid, play area in the Ebrobio Basin Street * (Arganzuela), two on Celio Villalba Avenue ( Hortaleza), and another one in the Plaza Sierra de Grazalema * (Villa de Vallecas). * – At least 80% of the elements are integration-

The two large parks of the city are fully adapted: the 9 de Octubre park (developed by the handicapped Sense Barreres association) and the El Campet park. [More info]